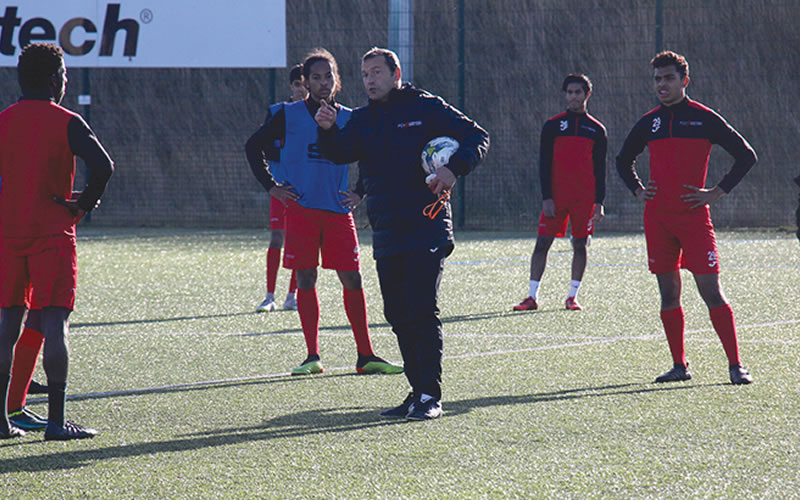 Former Cobblers manager Colin Calderwood can’t wait to get stuck into his new role as head coach of the Northampton Town International Football Academy and lay the foundations to support the development of future generations within the game.

The Scot had an illustrious playing career, rising from England’s fourth tier to the top-flight and going on to represent his country in European and World Cup tournaments.

The theme of success continued after Calderwood hung up his boots in 2001, managing Northampton Town and Nottingham Forest to promotions and coaching some of the best teams in the English Football League as recently as 2018.

“The club is in a really nice place and this has added another layer to Northampton Town,” explained the ex-Spurs and Aston Villa defender. “We want to build awareness of this programme, and be on the hit list for students.

“This avenue is something that I’m experienced in, and there are a lot of things that sit nicely within it. The timing of it is huge, I live in the area, and I get to work under my own steam in terms of what the programme will be.

“It will provide the opportunity to use my experience from the clubs I’ve been at, implementing the things that I thought were good to create something new.

“The association between Moulton and the club is certainly a good one, and the experience of Graham [Starmer, FCV Academy managing director] and Sammo [Ian Sampson, NTFC Academy manager] combines to make it a smooth-running operation, which will certainly help in getting my feet under the table.”

As a former centre-half who emphatically climbed the football pyramid with Swindon Town, the 55-year-old certainly sees an appetite for a fresh and distinct academy programme in the modern game.

“If the only way [to become a professional player] was to be associated with a league club, get an apprenticeship through a Youth Training Scheme, and then get a pro contract and move into the first team, then it closes the door on 95 per cent of people.

“Players develop physically, mentally, and emotionally at different rates, and getting into the game becomes an increasingly greater challenge the older you are. You have to be more determined and self-disciplined in those early 20 years to get the break.

“Even in the Premier League, players’ chances will be significantly improved by their attitude, application and the good fortune of being in the right place at the right time, but not everyone gets that opportunity.

“There was a time when I looked at the England team and the number of players who made their first steps at a lower level was more than half of the squad, so that’s a great example of being able to improve.

“Physical and technical attributes will be at a good standard in the majority of those who join us. Then you look at attitude, application and the environment, and you teach them what’s relevant in modern-day football, rather than what’s required in a very simple passing drill.”

Since beginning talks about the head coach role at NTFC IFA, Calderwood has become enthused by the potential impact he can have through the new development platform.

“The attractive thing is how do we develop it from this starting point? The utopia would be a graduate who becomes a professional footballer quickly, but we are catering for hopefully 24 to 30 people and we want to help them and the academy grow.

“They might alternatively make it in a sports-themed career in sports science or nutrition, and aside from the players, you can teach the younger staff that crave being involved with a club structure. It’s very hard for young physiotherapists, analysts, etc. to get that opportunity, so my experiences will be useful to the club staff as well as the players.

“It’s not all about producing the one player, but developing a greater percentage of the group to do well in their future life, as much as in football.”

Northampton Town International Football Academy will open in January 2021 and players are invited to register their interest now.