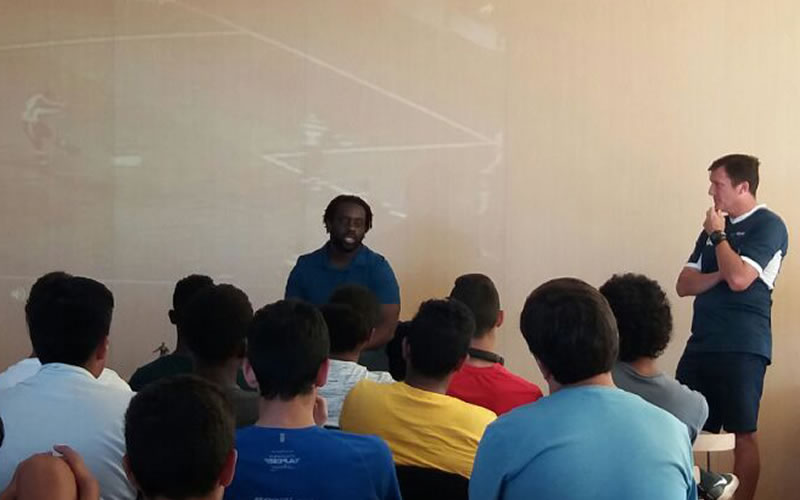 FCV Academy’s development camps regularly welcome guest speakers, and July’s was no different with ex-Newcastle United defender Olivier Bernard in attendance to speak to the group of budding young footballers.

Frenchman Bernard, who rose through the academy ranks at Lyon in his native country before making the move to the north-east of England, visited Borderville Sports Complex and provided insight and inspiration to camp attendees, and he began by telling the story of his rise from childhood misdemeanours to the Premier League.

“At 13 I was spotted by the biggest academy in France, Olympique Lyonnais, so I left home and spent six years there – it was a difficult time but I was living the dream until suddenly, aged 18, I was without a club.

“I moved to England, even though I couldn’t speak a word of English, to join Newcastle United where I was able to play under Sir Bobby Robson, who I always greatly respected.

“I left for Southampton and then Rangers, playing under managers like Harry Redknapp and Sam Allardyce, before injuries took their toll and brought my career to an end.”

Revealing that a hip injury ended his footballing career allowed Bernard to provide his first key piece of advice, proving that hindsight is a wonderful thing.
?With no football left to play, Bernard was unsure what to do with himself. He had never prepared for a day without a football at his feet.

“If I was in your shoes I’d definitely give myself something else to focus on aside from football – I didn’t do well in school so I had no fall-back option,” he said.

“I went through a spell of suffering with depression but luckily I had the right people around me who helped me through it and I started working in football once again, with the French equivalent of the Professional Footballers’ Association.”

Bernard continued giving advice, highlighting the late Gary Speed as a prime example of how dedication and endeavour players a key role in reaching the very top.

“He was the best player I ever played with and a model professional. We had to be at training for 9:45am at Newcastle but he’d be there at nine, working in the gym, and he’d go back in while everyone else was showering and getting ready to go home.

“Working with the French PFA, I see a lot of young players who have been released from contracts at big clubs – they have the ability but they don’t have the right attitude. It’s all about getting the right mix of talent, hard work and attitude.

“Gary had all those things and it paid off for him because he went on to be a captain at all levels, including for his country.”