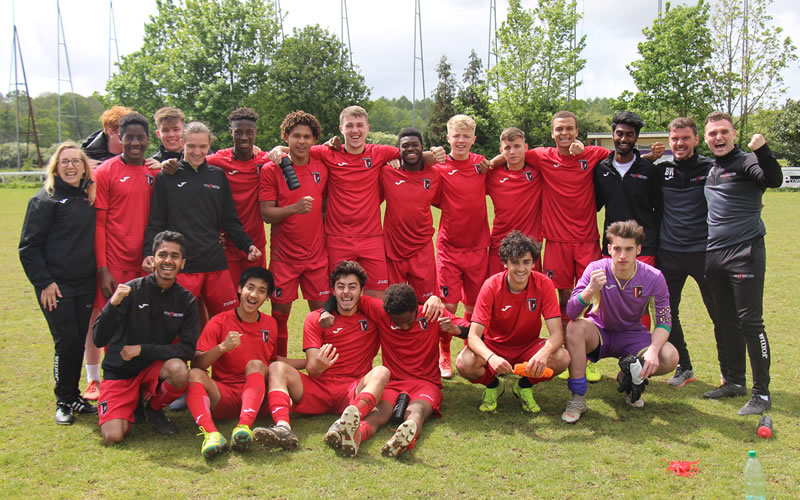 The title was clinched at the end of April with a 2-2 draw against Eastwood, but it was a collection of strong performances throughout the season that ensured the trophy would be heading to Stamford for the first time.

The team is now competing for the overall National League U19 Alliance crown over a series of knockout matches. FCV Stamford have already beaten Guiseley Academy 3-1 in their play-off game, and Eastleigh Whites 2-1 in their quarter-final.

FCV Academy players are now one of the country’s top four teams at this level, and coach Ben Watts is pleased to see the squad’s achievements being acknowledged.

“We set out to win the league and we’ve achieved that,” he said. “I’ve had lots of calls from people congratulating us, and if that’s happening to me that’s great because it means the players are getting recognised.

“For your group to win the league, you have to be consistent, and we have been. We are a good footballing team, and we’ve got a good balance on and off the pitch.

“At this stage of the season, it can be over, waiting for the end of May when the boys can go off on their holidays. But, as our boys are second years, each game might be the last time they are playing together unless they can keep it going.

“They look around the changing room and they see their friends, as well as their team-mates – that’s the spirit and togetherness we’ve got.”

Not only have these FCV Academy students learnt how to win and become champions, but also how to prepare for important knockout games – which in a week when English teams have secured all four spots in the finals of the two major European competitions and the EFL play-offs kick off – is another vital part of their learning which will benefit them further down the road.

All eyes are now on the semi-final at home to Dover next week.

“The boys know I’m quite relentless on the prep,” he admitted. “We can’t do a lot different to what we’ve done all season.

“Anybody who we play now have won their division, and we need to set our standards even higher. But everybody has bought into this.”