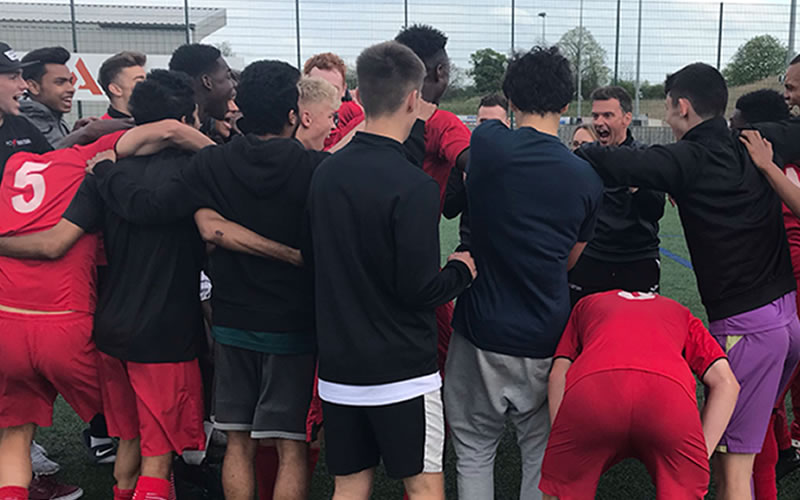 With FCV International Football Academy opening its doors to a new group of full-time students early in September, it will not be long until the boys are pulling on their FCV Stamford kits for the first time.

Last season saw the FCV Stamford team have their best campaign to date as they finished as champions of their National League U19 Alliance Division G and went on to become one of the top four teams in the country at this level.

We begin the new season, where FCV Academy will be aiming to replicate their success, with a look back at the story of last year’s title win.

FCV Stamford started slowly, picking up two wins and two losses from their first four fixtures. However, they were already demonstrating their attacking threat scoring ten goals in the process as the team began to gel.

Towards the middle of November, the team raised their game, winning five matches out of six and continuing their fine form throughout the colder Christmas period and into the new year. Their 19 goals showed the team was a force to be reckoned with in the division.

Despite FCV Stamford’s strong first half of the season, there was no time for complacency, as the side played six games in 24 days.

With encouragement from FCV Academy’s top-level coaches, the boys rose to the challenge, winning four of their matches and drawing another. This left the team still in with a chance of winning the division with two matches to go.

At the end of April, FCV Stamford were crowned division champions after a 2-2 draw against Eastwood.

This meant the side entered the National League U19 Alliance play-offs, competing against other division champions to be names the best team in the country over a series of knockout matches.

Into the final four

FCV Stamford began the play-offs in style, beating Guiseley Academy 3-1 to book their place in the quarter-finals.

Eastleigh Whites were FCV Stamford’s next opponents, and despite the Whites’ best efforts, the Borderville boys were always a threat on the counterattack and secured a 2-1 victory to progress into the semi-finals.

After establishing themselves as one of the best teams across the nation, FCV Academy coach Ben Watts was delighted with the quality of football and togetherness in the side.

However, their historic journey came to an end after a 1-0 defeat to Dover Athletic’s Academy.

It is a great time for new students to be taking on their full-time courses at FCV Academy, looking for successive league titles on the field.

A mix of new faces will be added to the players who remain from last season as FCV Academy open their doors to new students in September.

There is an overwhelming excitement as to what this year will bring and FCV Stamford will be looking to go at leats one better this year and reach the final.