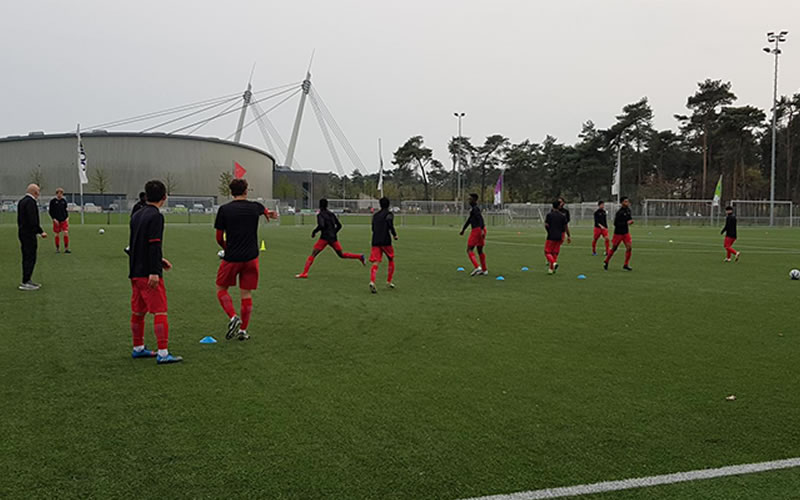 FCV International Football Academy’s students enjoyed a beneficial trip to Belgium last month to showcase their abilities, with support from the 2019 Erasmus+ scheme.

The players were based at second-tier side Lommel SK and participated in a variety of activities whilst learning from the club’s professional coaches during their two weeks abroad.

This was coach Ian Sampson’s third trip to Belgium on this scheme, and he was extremely impressed by the efforts of this year’s cohort.

“We trained for the first couple of days and then played against KESK Leopoldsburg, and we won that game 3-0,” reflected Sampson. “The lads performed really well, considering we had only been there two days.

“They were dealing with a different voice, and their enthusiasm and application to a new coach was very good.

“We are talking about football being a global language, and we’ve got lads from all over the world. Now they’ve gone to another country other than England and dealt with European coaches, and they’ll take some really good points from them.”

These learning experiences from coaches across the world are priceless for upcoming players, giving them a feel for various styles of football. In Belgium, they took part in new, exciting drills and three competitive matches with local sides.

Plans are already being made for next season’s European trip and wherever the final destination, the venue will provide something different for the FCV Academy students, but a high standard has been set by this year’s visit to Belgium.

“Their facilities were really good,” he said. “We also played their [Lommel SK’s] youth team, which was a high level. We were surprised at how physical they were, and they were highly motivated to do well against our team.